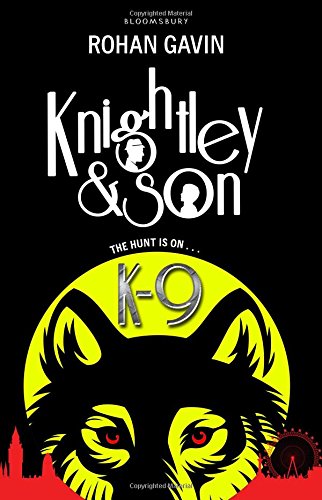 Darkus Knightley is the oddball son of an oddball father. Knightley Snr has been in a catatonic state since Darkus was nine years old and, now thirteen, Darkus only really knows his dad through reading the copious notes he left behind. Alan Knightley was a maverick detective, you see, on the trail of a mysterious and sinister criminal group known only as the Combination. In his coma he is unable to prevent his young son from absorbing all the information he has collected about them.

This comes in handy, however, when the Combination launch their masterplan and, perhaps not coincidentally, the elder Knightley suddenly awakes. A strange self-help book is having a bizarre effect on an apparently random selection of individuals, causing them to have hallucinations after reading it, and then driving them to do wild, crazy and illegal things. Alan Knightley is sure the truth can be found in the evidence he gathered before falling into his coma, but unfortunately the Combination gets to his notes first. Fortunately, however, all is not lost, because Darkus Knightley has something of a photographic memory.

I loved the Three Investigators mysteries when I was around the age this cracking yarn is aimed at. So much so, in fact, that adult crime fiction has failed to make much of an impact on me – I miss the trailer hidden in the junkyard, the English chauffeur Worthington, and the epilogues in which logical genius Jupiter Jones sat down to explain how he solved the case to none other than Alfred Hitchcock.

Reading this story reminded me a lot of reading the Three Investigators books. Darkus is quite a similar character to Jupe, and the adult characters here are (with the odd exception) similarly encumbrances to the mystery being solved. Benedict Cumberbatch’s Sherlock is another clear influence. Darkus is rational, precocious, antisocial and sometimes rather knowingly superior. But he’s also quite charismatic with it; precisely the kind of character to carry this kind of tale.

It works just fine the way it is as a standalone novel, but I hope Rohan Gavin goes on to turn it into a series, perhaps with Knightley Snr taking more of a backseat (or having another prolonged snooze). The story works best when Darkus is alone and surviving (and succeeding) by his own wits.