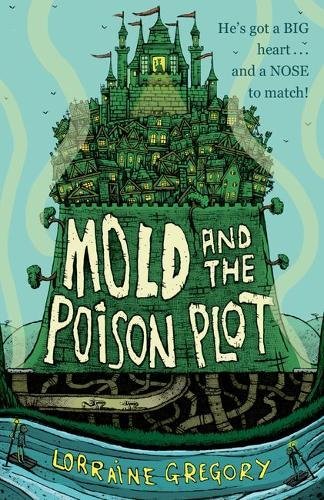 Mold has a nose that is the envy of nobody. He personally is entirely unfussed by the size of it, but secretly he wonders whether it was part of the reason his birth mother abandoned him as a baby. Not that he has particularly suffered for that, because his adoptive mother Aggy has given him a wonderful life, even if her healing tonics aren’t as highly regarded as she thinks they are and she drinks too much.

She’s no royal assassin, however, so it’s a shock to both of them when she’s arrested for trying to kill the king with poison disguised as a tonic. Suddenly Mold’s nose is not just an expansive sunshade for his lip, it’s the key to saving Aggy’s life. Naturally with such great nostrils comes an almost superhuman sense of smell. That means if Mold can get close enough to the comatose king, he might be able to smell what was used to poison him, and then maybe just perhaps he will be able to sniff out a cure in time to save not only the king, but his falsely-accused assassin too.

Mold’s adventure is packed with heroes and villains aplenty, but it is the nasally-blessed one himself who stands out, and not just because of that hooter. The story is told entirely through his wonderful first-person voice, an instantly convincing working-class vernacular that puts a fresh new spin on what is at heart a traditional story about fairness and friendship.

Lorraine Gregory doesn’t shy away from hints of a world that is riddled with injustice, suffering and violence, but these things give Mold’s quest agency, and don’t make the story any less rip-roaring and fun. Obviously a story about a boy with a big nose is going to involve some deliciously revolting details, most of which actually come thanks to a couple of trips through the ever-useful abandoned passages that are the sewers beneath the king’s castle.

Without giving anything at all away, come the end of the book it seems ripe (if you’ll excuse the semi-pun) for a sequel. Forgoing that, perhaps a movie adaptation by Terry Gilliam.