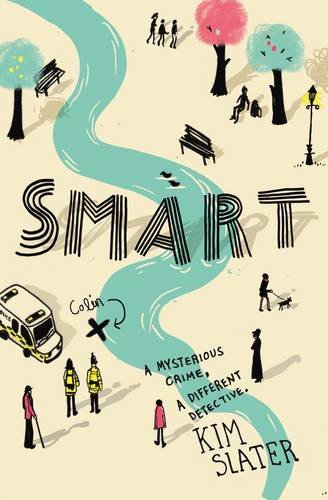 Drawn by the weeping of an otherwise friendly homeless woman, 14-year-old Kieran discovers a body half-submerged in the river. He knows the man’s been murdered because he’s seen lots of episodes of CSI, so when he revisits the spot a day or so later and finds no police presence – not even a tape cordoning off the scene – he decides to launch an investigation of his own.

Unfortunately he ends up multifariously distracted, not least by Tony, his layabout stepdad, and Tony’s bullying son, Ryan. Meanwhile Kieran’s estranged grandmother (who fell out with her daughter when Kieran’s mum fell in with scummy Tony) no longer answers her telephone. A strange man picks up and claims she hasn’t lived there in ages. It might not be a murder, but this is another mystery that Kieran needs to solve, and maybe one that’s just as important to crack.

Kim Slater doesn’t reveal what is ‘wrong’ with Kieran, though he is definitely higher functioning than Christopher Boone in The Curious Incident of the Dog in the Night-time

. Kieran prizes the observational skills of Sherlock Holmes (and L S Lowry), but whilst he sees everything, he reports, matter-of-factly, things whose true significance he sometimes misses, such as his mum not going out because she has a black eye after a row with Tony.

Smart is one of the best novels I’ve read this year. Captivating from the start, the storytelling seems effortless. The arresting opening is as grim as it gets – this is a heartwarming story that heats up gradually. Whilst Tony is the worst kind of monster you find in fiction, one that’s entirely believable, Kieran is an innocent, but at the same time, one characterised too richly to be just a wide-eyed faux naïf.

His coming to understand the complexities of the world is a classic coming-of-age plot. That he remains steadfastly non-judgemental throughout, regardless of what happens, might not always be in his own best interests, but is perhaps what will make him a great detective one day.