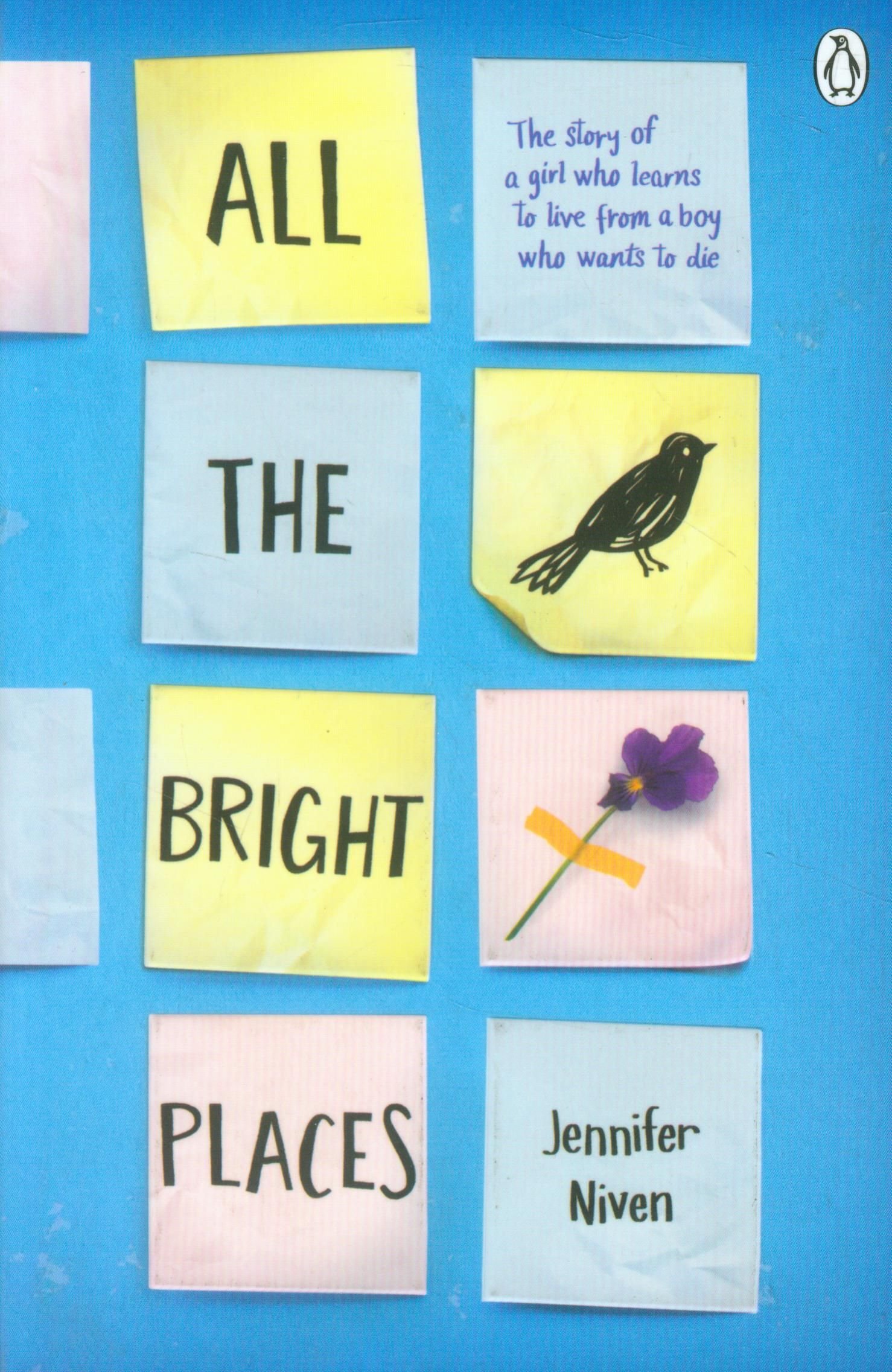 Violet first speaks to Theodore Finch on a ledge above their Indiana high school. From below, their classmates watch as Violet talks down the strange, eccentric, rebellious boy they have all come to call Theodore Freak. She ends up a hero. And he ends up even more of a freak.

Except that’s not what really happened. She didn’t go up there to talk him down. She wasn’t even expecting to have competition for the ledge. Instead, he is the one who talks her down. When he doesn’t contradict the version of events the rest of the school chooses to believe, she reckons she owes him one. So they embark on a school project together, having been charged with finding two special places in their state that hardly anyone else will know about. But they don’t stop at two. And along the way both Violet and Finch discover they have a lot more in common besides the fact that they both felt like they had a good reason to be up on the ledge that day.

There is a constant sense of an ending about everything that happens in this novel. High school is coming to an end. Most people Violet and Finch know will soon leave their small town. Friendships are already proving to be transient. Meanwhile Violet is still dealing (or rather not dealing) with the sudden accidental death of her older sister, almost a year before.

This is the second YA novel I’ve read this year where I haven’t got on with the characters to begin with. At first Violet seems like the narrator in the same way Watson is the narrator of Sherlock Holmes stories – she’s rather passive and small, dwarfed in the imbalance created when the story starts with her meeting a character as large as Finch. He meanwhile seemed too cool to be authentic. The other characters may call him a freak, but you’d much rather be his friend than theirs.

Really, I was making the same mistake with All the Bright Places as I made with Non Pratt’s Trouble. Violet isn’t really small and passive, and Finch isn’t really this strange, cool maverick (well, not as much as he pretends to be). Those are the roles they have either been assigned or consciously adopted (or a bit of both). It’s all front, and only with each other can they let their guard down and be themselves, hurt and vulnerabilities and all.

It is a book about endings, but also about how life is full of things coming to an end, every single day – and then continuing the day after, starting afresh, in a constant state of renewal. Violet may have tried to stop the world the day her sister died, but Finch helps her to see that that’s impossible, and that she shouldn’t fight the future any more.

This book was recommended to me as being better than The Fault in Our Stars. Such claims are always going to be dangerous. But I certainly felt that Jennifer Niven’s novel was less safe than a lot of John Green’s output. Here the characters use the language real teenagers do, and talk about the kinds of things real teenagers talk about, even when that means the book isn’t very parent-friendly. Unlike Gus in The Fault in Our Stars, Finch actually lights the cigarettes he puts in his mouth. The sex in this book doesn’t need to be weighed down by resonance. As such I felt All the Bright Places was closer to recent British YA than several of its American peers – edgier, more realistic, and most importantly, more honest.

Hazel Lancaster is sixteen years old and, by choice, her best friends are her parents. For three years she has not gone to school at all. She considers herself a grenade, one that stands only to hurt those closest to her. She keeps everyone but her parents at a distance so that when the cancers wracking her lungs finally stop being held back by the drugs, there won’t be anyone (well, almost) that will be hurt by her loss.

Then she meets Augustus Waters at a support group for teens with cancer. Gus is nominally a survivor, in remission from the cancer that took his leg, and only shows up at the support group because his friend Isaac is on the verge of losing his one remaining eye to save his life. Hazel and Gus shouldn’t really get on. They have little in common apart from cancer.

But they bond over a book about a girl with cancer that ends mid-sentence, and then embark on a joint quest to track down the reclusive author and find out what happens to all the other characters afterwards. As with most plotlines like this, however, it’s not the journey that matters, it’s the people who are on it, and what happens to them en route, that make the novel what it is.

There is a line in Les Miserables

where Victor Hugo states: “It is nothing to die. It is a tragedy not to live.” John Green doesn’t need to quote the line in his novel because that’s what the entire book is about. It is a story about living, not dying. Hazel has prepared for death, but after she meets Gus she realises she no more has to sit around and wait for it to come than any other mortal.

Initially Hazel and Gus seem like the usual acerbic, slightly cynical outsider types that John Green writes about a lot. Except both of them are well aware that it’s all front, and the fact that they don’t need to put it on for each other brings them closer. Green goes places he for the most part avoided in the other two novels of his I have read (Looking For Alaska

). He always reined it back at the last minute, leaving his books nicer, but less honest, than the YA works of Melvin Burgess, Benjamin Zephaniah and, of course, Stephen Chbosky.

, but the novels are quite incomparable. That really was just a cancer book (however good), but The Fault in Our Stars is not really about cancer. The title comes from a line in Julius Caesar, in which Caesar explains to Brutus that fate is out of our hands. This novel is about two ill-fated people stopping using that as an excuse.

This time five years ago I was trying to write a novel about young people facing up to mortality (theirs and everyone else’s). After two years and some 65,000 words, I ran into trouble, and had no idea what came next. I never did finish it, but now I don’t have to. I can see why The Fault in Our Stars resonates with so many teens. I imagine it would have the same effect on many adults, if they gave it a chance.

When they are nine years old, neighbours Quentin Jacobsen and Margo Roth Spiegelman find a dead body in a park. That’s the day Quentin falls in love with Margo, but over the next decade he could barely even call her a friend. Then, a few weeks before the end of high school, she suddenly turns up at his window in the middle of the night, and conscripts him in a campaign of epic revenge against those who have wronged them both.

Quentin has never been more in love with her. The next day at school he expects everything to be different. And they are. Margo has completely disappeared. Except perhaps not as completely as first appears. As Margo fails to reappear even after several days, Quentin begins to believe she has left behind secret messages just for him, even if his friends think he’s seeing what he wants to see. They’re wrong, of course. The only questions are whether the messages are clues to where she has gone, whether she actually wants to be found, and indeed whether she will even still be alive when Quentin catches up with her.

With The Fault in Our Stars

, John Green has recently broken through that point where even people who don’t know anything about him have heard of his name. He’s the crown prince of YA, filling the void left by Stephen Chbosky after he never wrote a follow-up to The Perks of Being a Wallflower

, which centred around a similarly feisty girl who also only appears in half the story. Unlike Looking for Alaska, Paper Towns doesn’t suffer from its most interesting character’s disappearance from the plot, possibly because she’s still there at the heart of it, even if not physically. Both books are more about the teenage boy than the teenage girl he is obsessed with, anyway, but Paper Towns does it better.

This is a novel about a journey, in more ways than one. It’s about life and death, Walt Whitman and Wikipedia, and all the little things that either become less important or more important as you grow up.