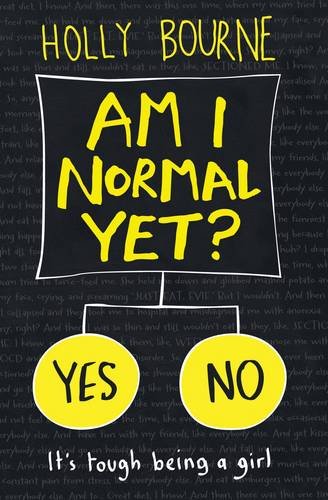 A couple of years ago, Evie stopped eating, her weight plummeted and she ended up being sectioned. But she wasn’t anorexic. Her aversion to food wasn’t caused by anxiety about her weight, a dysmorphic perception of being fat. No, her worries were about bacteria, contamination, getting sick, vomiting – good old germophobic OCD.

Now, though, she’s got it under control (probably). High school, where she was the weirdest weirdo in the place, is over, and she’s got a second chance at college, where the only person who knows about her past is her best friend Jane. Jane’s now got into boys (or specifically Joel) so Evie is pretty much forced to make new friends.

None of Amber, Lottie, Guy or Oli know about her past, and Evie is determined to keep it that way, but the more she gets to know them, the more she comes to see she doesn’t hold the copyright on mental health problems, and the people who will be most and least understanding of them are not necessarily the ones she would expect.

This is really quite a fantastic novel about living with obsessive compulsive disorder. It is not a consciously worthy or earnest novel, and Holly Bourne has a perfectly judged light touch, deftly providing plenty to laugh about – rather than at. Even Evie recognises that her obsessions and compulsions are irrational, but intellectualising it doesn’t stop the pervasive worry.

But this is not just a condition-of-the-week sort of book. Her OCD interferes with her life, but Evie is still determined to live it. Pursuing normality forces her into all the normal situations where normal people run into normal problems, and whilst Evie’s anxieties do tend to get in the way, sometimes they might also give her a unique perspective on those normal problems (and those normal people, for that matter).

There’s also a funny subplot as Evie and her new (girl)friends struggle to reconcile their growing interest in boys with feminism, analysing their own conversations with each other for whether their lives would pass the Bechdel test. It seemed a bit of a self-referential joke to begin with, but it segues into the main plotline in a way that is unexpected before it happens, but from the other side seems obvious and, indeed, spot on.