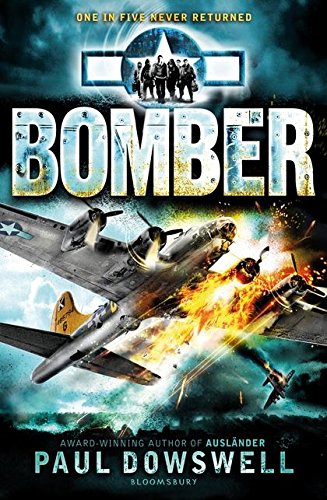 It’s quite the culture shock for Brooklyn native Harry Friedman to leave the land of plenty and arrive in an England that has already been at war for four years – a country of rationed food, air raid sirens and shelled-out buildings. He isn’t given time to acclimatise, though. Barely has he got his feet on the ground when a B17 Flying Fortress landing at the airfield he has been posted to turns into a fireball.

This is not the heroic adventure the underage Harry thought he was signing up for based on the Pathe newsreels showing 3,000 miles away. Back there, you’re a hero if you complete 25 missions. Over here, you’re just a fairytale – hardly anybody lives long enough to do that. Once he’s understood that, Harry is determined to live every day in the moment, because tomorrow he might have to fly to face a faceless enemy for whom having a surname like Friedman will single him out.

For much of its length this is a more episodic, action-driven novel than many of Paul Dowswell’s others – focused on the events rather than the characters. Harry’s Jewishness is mostly just there to increase the suspense after his Flying Fortress is shot down over France in the second half of the novel, and his pairing off with a British sweetheart is more of a fantasy on his part than a developed relationship, seeing as they only really get a couple of scenes together.

To an extent the book reminded me of the film Dunkirk. We don’t really need to know any more about these people. They exist only in this moment, because it may be their last. Everything here is about the danger and tension of being the guy stuck in the transparent gun turret beneath a bomber plane that the Luftwaffe is desperate to stop reaching its target. And what happens next when the bomber crew fails their mission, and the Luftwaffe succeed in theirs.