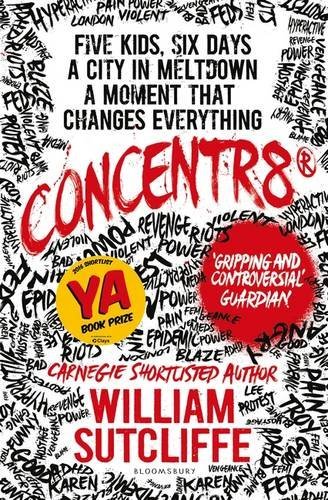 London’s teenagers have been successfully medicated. Concentr8 is basically Ritalin on, er, speed, and Blaze, Troy, Karen, Femi and Lee have all been taking it for as long as they remember. It’s been so successful in reducing trouble, however, that a cash-strapped national government has forgotten why Concentr8 prescriptions became so ubiquitous in the first place. So they pull the plug and cut off the free supply. And then the rioting kicks off.

In the midst of the chaos, Blaze and his friends make it all the way to City Hall. An encounter with one of the mayor’s underlings is only averted from ending in a stabbing by becoming a hostage crisis. But over the next five days, as the novel delves into each of its protagonists’ perspectives, it slowly becomes apparent that perhaps they’re not all up to being kidnappers after all. Indeed, most of them are just going along with it because they believe all the others are completely committed to seeing this thing through.

It’s unclear whether this novel is aimed primarily at adult or YA readers. The behind the scenes political and journalistic shenanigans away from East London are probably of little interest to the latter, whilst a tale of teenagers swept up by the herd but finding their own sense of individuality in the middle of it is probably of little interest to the former. There are probably also too many perspectives (seven or eight – I lost count – in a novel that’s under 250 pages) to really get to know any of the characters very well.

That said, it’s a very visceral and pointed response to the 2011 riots in London, and William Sutcliffe doesn’t play it safe, make any obvious arguments, or find any neat, cosy solutions come the end. He took a potentially risky decision to make most of his kidnappers black teenagers, but ultimately the true division here is not one of race at all, but the good old British class system. He turns things on their heads in the second half in an interesting way, so whilst there might not be any true villains in this story, there aren’t any true heroes either.