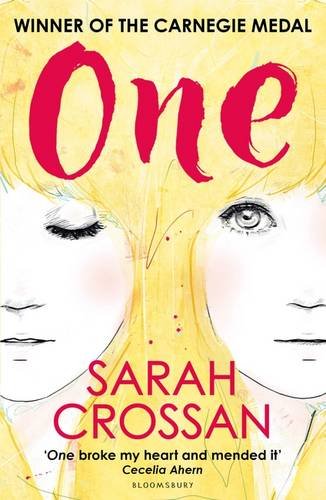 I’ll admit I approached this one quite sceptically. I’ve read a couple of novels in blank verse before and never felt it added anything. I would go so far as to pin my cynical, philistine colours to the mast and say the only way I could tell they were supposedly poetry rather than prose was because the line breaks were in funny places. That it didn’t add anything to the book didn’t necessarily mean it detracted anything, of course.

This one, though, is different. I can’t say why because it would spoil the story (slight though it is), but coming out the other end, finding out the real reason why those lines broke where they did, I don’t think it could or should have been done any other way. Pretty much every line is lyrical – an image, a feeling, a metaphor – but its layout on the page is ultimately significant too.

One is the story of Grace and Tippi, conjoined twins who have made it into their teens, which means they have to deal with all the usual teenage angst whilst physically connected to someone who’s in love with a different boy. Sarah Crossan doesn’t shy away from any of the awkward details. Grace and Tippi know everything about each other. But then, they always have done.

Real life continues around them, of course. Their father struggles to find work and is a secret (though increasingly less so) drinker. Their sister, who silently accepts that her dreams and needs must take second place in this family, slides into anorexia. And that’s before Grace and Tippi meet any of the other outsiders of which the rest of the world is full of, too.

Even with the best of Western medicine behind them, few conjoined twins survive into adulthood, and health problems mean Grape and Tippi need to be separated. One will become two, and Grace, always the quieter of the pair, isn’t sure whether she has enough of her own identity to survive apart from Tippi.

This YA novel won the Carnegie Medal, a prize that has come into a bit of flak for some of its choices in recent years. I doubt anyone would argue that One‘s victory hasn’t done a great job in repairing any dents in its reputation entirely, though.