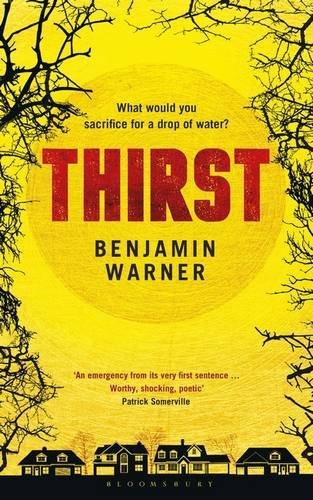 After being stuck in unmoving traffic for several hours, Eddie decides to ditch the car, let someone tow it, and worry about everything later. He’s been under a searingly hot sun all day and is dying for a drink. On his long trek home, however, he starts to overhear some alarming things. The powercut that caused the jam on the freeway has affected the entire city. What’s worse, the water’s out for everyone too.

Nobody is too worried to begin with – the power has been out before, so has the water, and even when that’s been the case for a couple of days, someone shows up eventually to fix it, and then everything’s fine. In the meantime they just have to sit tight and make things last, just in case it takes as long to fix things again this time too.

As the days pass, the shops empty of anything with a liquid content, and people begin to drink vinegar instead, they start to hear new rumours. The water won’t be coming back on. The only water that hasn’t been chemically changed to become flammable is undrinkable brackish water. And the rest has dried up, or burnt up. People start dying – but not always from thirst.

For much of its length this is a detailed forensic portrait of the end of the world as told from the perspective of a single neighbourhood falling apart, together. Its pace never seems slow, despite its depiction of the gradual descent into a hell of communal dehydration. Desperation and primal panic turns friends and neighbours into opponents – competitors rather than enemies. Every drop of water must be fought over. Nobody else can be trusted – who knows what secret bottles or cartons someone might have squirrelled away if they don’t seem as thirsty as everyone else.

When it becomes devastatingly clear that nobody is coming to save them, what thin threads of society that remain are finally cut. The novel wanders off the road a bit after that, as Eddie’s extreme thirst provokes a delirium that allows the story to indulge a little too predictably in developments that might or might not be real.

Up until then, however, it’s really quite excruciatingly tense and all too plausible.