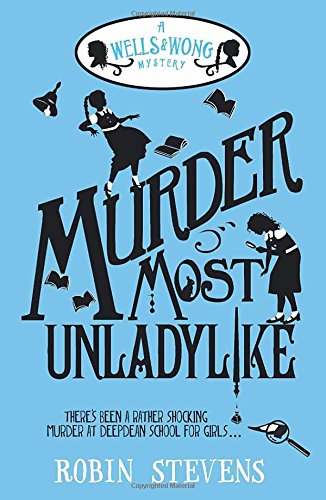 When I was younger I was a big fan of books where people my own age started their own detective agencies. My favourites were the Three Investigator books, which remained a mainstay of my reading into my teens, even when the rest of my tastes were getting decidedly more blood-soaked. I wanted to live in a junkyard and have a secret office hidden by a pile of junk. Their plots were a little safer (missing objects, etc) than the storyline of the first Wells and Wong mystery, which starts with the murder of a teacher at the Deepdean girls’ boarding school.

Hazel Wong finds the body of Miss Bell spread-eagled on the floor of the gym. She runs to get help, not least from Daisy Wells (President of the Detective Society, for which Hazel is Secretary – though really there are just the two of them anyway). When students and staffs descend on the gym, however, the body is gone. As Daisy and Hazel deduce, it can’t have been an accident (or suicide), because someone has obviously tried to cover it up. With a mysterious resignation note showing up, nobody else believes Miss Bell is even dead, let alone murdered, so it’s down to Daisy and Hazel to solve the crime on their own.

The story is set in that timeless version of quintessential England that probably didn’t even exist in the early 1930s, but it offers Robin Stevens the chance to affectionately pastiche Agatha Christie’s oeuvre. There are a few herrings so red they are practically neon as Daisy and Hazel work their way through the teaching staff, establishing who has motive and who is protected by an alibi. At one point things seem to be getting all Murder on the Orient Express, with everyone – perhaps even a couple of students – having a possible reason to want to snuff out Miss Bell.

Daisy and Hazel are a teenaged Holmes and Watson, with Hazel writing up the case and Daisy hanging over her shoulder, improving the text from off the page. They bicker, they fall out, they realise they need each other to solve the case. It’s a sparkling relationship that pushes the book onto another level. This is the first in a series and I’ll certainly be checking out the others.