Yesterday I downloaded my complimentary author’s copy of the new Audible audiobook of Final Voyage: The World’s Worst Maritime Disasters, which was a surprisingly exciting experience. My previous book, How to Snog a Hagfish!: Disgusting Things in the Sea, was recorded by the charity Listening Books, but is only available to their members. The audiobook of Final Voyage, however, is available commercially from Amazon or Audible’s own website. Indeed, you can buy it here. 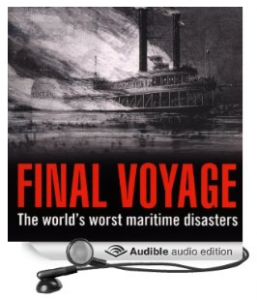 Matthew Waterson has done a good job of narrating the text; his voice has precisely the right amount of gravitas. It’s always interesting (and a bit weird) to listen to your words read aloud by someone else, especially if you’ve only heard them in your own voice (or what you think is your own voice) inside your own head. All of a sudden you get a little bit more distance from the writing, and what looks straightforward when written down suddenly starts to sound like it could have done with losing a subordinate clause to the next sentence!

The truth is, though, I’m not really an audiobook kind of person. I remember being a member of Tape Club (don’t worry, I am allowed to talk about it) in primary school, and always searching out the next story about Gobbolino the Witch’s Cat. But as soon as I was able to read the kinds of stories I wanted to read, rather than just listen to them being read, I moved on. Of course, I used to say I wasn’t an ebook kind of person either, and now the longest novel I have ever read I read on the iPad. Similarly, I was a devotee of the CD, until last year, when I only got a couple and spent far more on iTunes.

So maybe after I’ve finished listening to mine, I might be ready to listen to someone else’s audiobook. Though it’s unabridged, so there’s 5 hours and 48 minutes to listen to first.

Anyway, you can listen to a 3 minute sample on the Audible website by clicking ‘Sample’ under the cover.