This was Stephen Fry’s first novel, but the second of his that I have read. The first, The Stars’ Tennis Balls

, was a modern retelling of The Count of Monte Cristo

, about a young man kidnapped and imprisoned for decades, but who then escapes and seeks revenge on those responsible. It’s a novel that trundles along for half its length, neither particularly boring nor particularly marvellous. But then it suddenly takes off and becomes unputdownable. As with A Tale of Two Cities

, it makes a good argument for not giving up on a book too soon.

The Liar is more consistently readable. As anyone who has read the first volume of Fry’s autobiography

will quickly realise, a lot of what happens here is semi-autobiographical. Just like Stephen Fry, young Adrian Healey goes to a prim and proper public school, falls in love with another boy, is expelled, has a run-in with the law, manages to get into Cambridge, and there becomes involved in the theatre. Presumably Fry never spent time as a rentboy in Piccadilly and didn’t become embroiled in international espionage during the dying days of the Cold War, but perhaps it amuses him to have us wonder.

Even more so than The Stars’ Tennis Balls, The Liar changes direction abruptly and frequently, becoming a completely different novel every 83 pages or so. Or so it appears. Much is not necessarily as it seems, as befitting a novel called The Liar. Every major development in Adrian’s life is precipitated by a gross dishonesty on his part, making the novel less a comedy of errors than a comedy of fibs. Though it did make me wonder what a straight thriller from Fry would be like.

The last three months have been the most prolific of mine in the last seven and a bit years. In the meantime I’ve often used working full-time as an excuse as to why I don’t manage to write over 100,000 words a year any more. Apart from the last week, I have been working full-time for all of 2013, but I decided to take advantage of the Easter bank holidays to get 10 days’ holiday for the price of 4.

Because I wanted to finish my latest work in progress. I only started it just after Christmas, but it completely took over. I arrived at the end on Friday morning, reaching the quarter-way mark of a sixth WHSmith exercise book (a sort I have used so long I can reasonably estimate the story is pretty much exactly 63,000 words long in its unedited form). Of course, quality is more important than quantity, but it does go to show working full-time never was a good excuse. 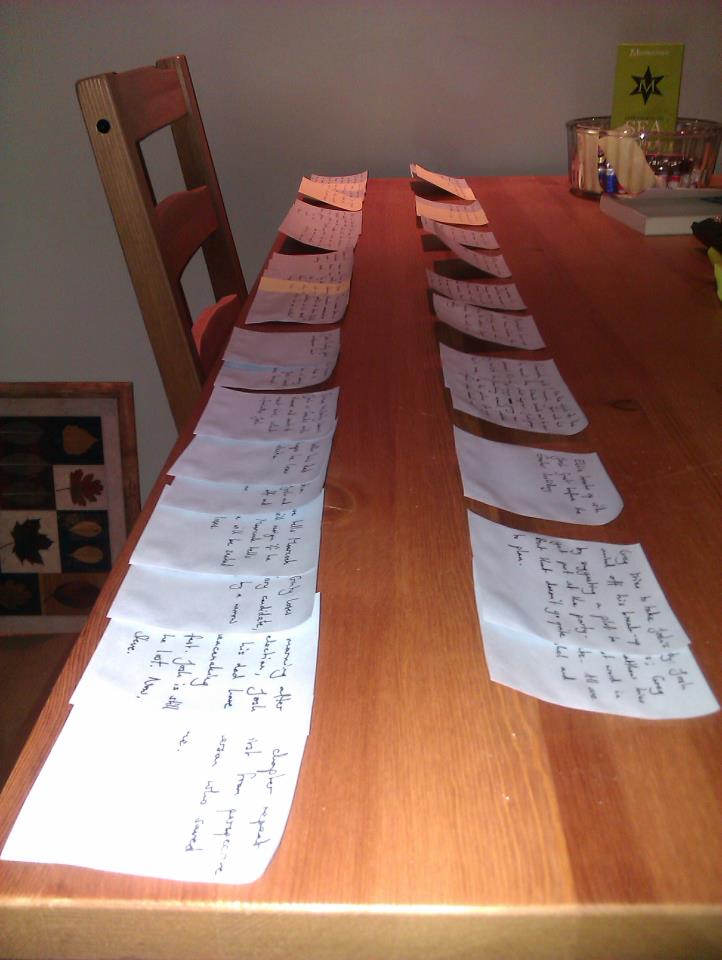 Whether anything comes of this story or not, it will always be something special to me. In a way it is a culmination of something I have been trying to write for about 14 years now. Perhaps that is why it was fit to burst out so rapidly; it’s been waiting all this time. I won’t go into specifics at this stage – perhaps it is already tempting fate to even mention it – except to say it is a teen novel, one about ‘issues’, but one which I was always conscious to make an awkward and funny story about growing up. As such it’s an entirely different barrel of chipolatas to The Thieves of Pudding Lane, which could be either a good thing or a bad thing. Writing it involved raking over a lot of old coals, but in a cathartic way.

I wrote this slightly differently to how I’ve written things before. I gave up using a computer to write first drafts in 2011. I can type faster than I can think, which ultimately proved counter-productive. I spent more time fiddling (not to be confused with editing, though that’s what I often convinced myself it was) than writing. Writing long-hand, thinking faster than I can loop my Gs and Ys, proved successful for The Thieves of Pudding Lane. And it did so again here. However, whilst I have always written from a plan (however flexible), with this story I eschewed anything of the sort – beyond the Post-It notes in the photo above. This story was more complicated, with a lot more characters to handle, and these notes were not so much points on a map as mile markers by the roadside. As I passed each one, it got consigned to the recycling.

If anything comes of the story, I will obviously be writing a lot more about it here. Otherwise, this may be the only post I will write about it. Whatever happens, the characters and the themes will invariably make themselves known in other things I write. It’s just that kind of story.